Rolly’s other vice president became president in 2009. Boyet Fabellon brought in new blood, as they say, to Chapter. His was a “SYSTEMATIC” approach on providing members of what they need to know. Aside from the GMMs there were out of town team buildings and sports event. Makati Chapter was given the Best Chapter recognition during his time.

The Charter Members of the Chapter are prolific. 6 serving as National President, 4 bestowed the highest recognition of UAP which is the Likha, 2 recognized by the State as National Artists. From 30 members, the Chapter has now more than a thousand in its roster.

Ludivina Gonzales, one of Rolly’s vice presidents, took over as president in November of 2008. The Chapter celebrated its 31 st Anniversary during her term.

Badminton was the sports then during Eben’s term. UAP Makati Smash was held July 2004.

Topy Vasquez became president in 2005. This was one of the more memorable GMMs. The topic was Architectural Practice: Then and Now and the discussion was on how architectural practice should respond to the changes in economy and how the public perceived the profession.

It would now be more difficult to paint a realistic picture of what went behind the scenes of one of the more prominent Chapters of the United Architects of the Philippines. How important is this story? We don’t need to re-quote the words of a national hero for this. It is simply this

After Topy’s 2 terms as president, Pete Raralio was sworn in on 2007. The theme when he was president was “Impact of One, Power of Many”. The purpose of which was to harness the potential of numerous architects working together.

Jimmy Hermogenes’ term was launched from the springboard of Boyet’s successes in 2011. There was no better building ground for success for innovative leadership. His themes for the 2 years were “Building Connections” and “Inspiring Innovations” led to several memorable events for the Chapter. This were “Greentectural”, “Archipreneur”, “Pecha Kucha” and “Starchitect”. During Jimmy’s term started the tradition of recognizing the “Best Member” and “Best New Member” to encourage participation. To preserve the gains made during his term, Jimmy and his team “Rocked the Vote” by innovating the electoral process. 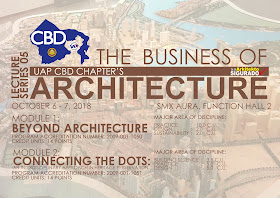 Kindly fill out the registration form