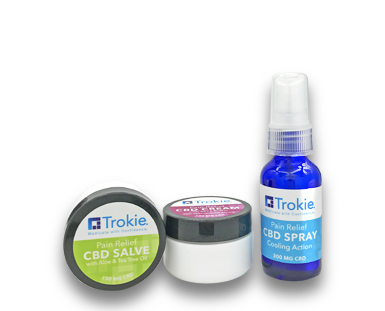 Until recently, Trokie’s products were only available to purchase at physical stores situated in various locations across the US. However, the company now has a fully operational website with an online store, which means you can now purchase products directly from the site.

Trokie sells Nanocapsules, which are said to offer 6X faster relief from symptoms. They have a total potency of 750mg, and there are 30 capsules per bottle. This equates to 25mg of CBD per capsule.

Unfortunately, the Trokie website does not give much information on the company itself. It’s not clear where the brand is based, and there is very little background information provided.

Although many customers prefer to have a wide range of products to choose from, the benefit of Trokie’s limited selection is that all research and expertise is focused on these few items. This means that if you’re in the market for any of these types of CBD products, Trokie is an excellent choice – since you’re almost guaranteed well-thought-out, high-quality products.

There are two patches per packet, and they retail for $18.99. To experience an instant soothing sensation, simply apply a patch to the affected area.

They are designed to be fast-acting and long-lasting, therefore, delivering the desired effects rapidly. A patented upper gum delivery system is used to ensure rapid delivery. They’re similar to subliingual tinctures, but placement under the upper lip (buccal) reduces saliva contact, therefore more compounds absorb directly into the bloodstream and avoid the digestive tract. Trokie claims that its lozenges deliver a precise dose of cannabidiol quicker than any other CBD lozenge on the market based on the route of administration (buccal) and research.

Dr. Kent Crowley is a trained executive with over 30 years of experience in the pharmaceutical industry and clinical medicine. He launched the brand in 2014 with the introduction of Trokie Fast Melt Tabs, which were designed to help young cancer patients combat chemo-associated nausea. After years of extensive research, the brand has expanded its CBD line to include several other CBD products. In recent years, many countries have passed legislation permitting the use of cannabis for medical reasons. This has given patients access to both herbal material and cannabis-based products, bypassing the strict regulatory procedures that usually apply to pharmaceutical development (Fitzcharles and Eisenberg, 2018). Further, legalization of cannabis for recreational purposes in several states of the Union as well as in internationally-relevant countries, such as Canada, conferrers cannabis an intriguing dual status, both as a pharmaceutical substance and a mere commodity, thus creating a complex regulatory scenario. Manufacturers of cannabis products, irrespective of their purpose, are met alike with the limitations that the lipophilic nature of cannabinoids, the main active substances in Cannabis sativa L., poses to their absorption and distribution in the human body (Huestis, 2005). Moreover, the psychoactive effects induced by Δ 9 -tetrahydrocannabinol (THC), the primary active ingredient present in cannabis, need to be: (i) minimized for patients to maximize the therapeutic index of cannabis medications, and (ii) carefully controlled for adult consumers in order to reduce both the risk of acute intoxication and the impact on public health and safety. Economic reasons also play a role since increasing the bioavailability of cannabinoids could allow for a reduction in the amount of active ingredient per dose, thus lowering the cost of the final product. Current efforts to achieve efficient, reliable dosing aim at exploring different routes of administration (e.g., pulmonary, oral, mucosal, transdermal) and delivery vectors (e.g., inhaling powders, nanovehicles) to optimize the pharmacokinetic profile of cannabinoids (van Drooge et al., 2005; Conte et al., 2017). Given the current lack of regulation in the medical and adult markets, cannabis-based products are readily available for the general population to acquire and consume without medical supervision. For some researchers, this represents a waste of valuable clinical information that could be extremely useful if adequately collected.

The adverse drug reaction questionnaire was completed by a total of 35 participants (7 males/28 females) with an average age of 65.3 years (descriptive statistics in Supplementary Table 1). Twenty AEs were reported by 16 participants (46%), with most reporting one single AE (N = 12; 75%) and four reporting two AEs. Descriptions given by participants corresponded to 7 AEs (with some of them relating to more than one AE) which were: dizziness/unsteadiness (N = 7), bad taste (5), throat irritation/dry mouth (N = 4), drowsiness/fatigue (N = 3), impaired consciousness/high feeling (N = 2), nausea (N = 1), and palpitations (N = 1). There were no reports of damage to the oral mucosa, gums, or teeth. None of the self-reported AEs resulted in a serious medical situation and most of them had only limited impact on daily functioning. Of notice, AEs associated with CBD-only Trokie ® lozenges were not related to any psychoactivity and were restricted to bad taste (4) and throat irritation/dry mouth (2). The remainder of AEs were associated with THC-containing lozenges, alone or in combination with opiates or other THC-containing products. Despite these AEs, 90% of participants reported being “satisfied” or “very satisfied” with the product (Table ​ Table1 1 ).

Pain intensity was calculated as the difference between PI-NRS values reported on December 2016 and those reported at enrollment, and it is expressed as mean ± standard deviation of the mean. Significance of differences was determined using a paired t-test (PI-NRS before vs. PI-NRS after). Differences were considered significant if P < 0.05. Statistical analyses were conducted using GraphPad Prism Version 7.0 (San Diego, CA, United States). Patient-reported AEs were analyzed descriptively using IBM SPSS Statistics version 23 (Armonk, New York, NY, United States).

To assess the safety of Trokie ® lozenges, we conducted a survey on February 2018 among PCC members with chronic non-cancer pain that had been enrolled for a sustained period of time, between 4 and 60 weeks. This time frame was selected to capture AEs associated to mid- to long-term use of Trokie ® lozenges. Participants were asked to complete a questionnaire to report adverse drug reactions (de Vries et al., 2013), slightly modified to focus on AEs caused by Trokie ® lozenges.

Trokie ® lozenge is a cannabis-based product currently available in six states of the Union (Arizona, California, Florida, Iowa, Nevada, and Minnesota) and Puerto Rico. Two observational studies were conducted with California-certified cannabis patients to assess the effectiveness and safety of Trokie ® lozenges. First, we focused on the effectiveness of Trokie ® lozenges to deliver cannabinoids, namely THC and CBD, through the buccal mucosa: does it work in practice? (Haynes, 1999). Our findings indicate that the use of Trokie ® lozenges is associated with a self-reported pain reduction in chronic, non-cancer pain patients, a condition for which the efficacy of cannabis has been previously described (Lynch and Ware, 2015). Of note, reported time to onset was between 5 and 40 min which, considering lozenges take 20–25 min to dissolve, seems consistent with, at least partial, buccal absorption (Karschner et al., 2011). However, it is reasonable to assume that it can also be swallowed with saliva. Correct placement in the mouth appeared to be critical for minimizing saliva production. Next, we aimed at assessing the safety of Trokie ® lozenges and the kind of AEs that could be associated with its long-term use: is it safe to use? Seven different AEs were reported by participants, one of them related to the organoleptic qualities of the product (bad taste) and the rest being common to other cannabis products containing THC, such as dizziness or dry mouth, none of which resulted in a serious medical situation and only had limited impact on daily functioning. Interestingly, our results are in strong agreement with a recent study performed in Israel on a large cohort of elderly (over 900 participants, 74.5 ± 7.5 years) reporting a reduction of pain levels from a median of 8 to a median of 4 on a scale of 0–10 after 6 months of cannabis treatment. Further, most common AEs were dizziness (10%), dry mouth (7%), and 18% of participants stopped using opiate analgesics or reduced their dose (Abuhasira et al., 2018). In our case, the proportion of participants reducing or discontinuing opiate analgesics was significantly larger (84%), similar to what has been previously found in a study based on patient self-reports (Reiman et al., 2017). This may be explained by the extensive use of opiate medication in the United States and the fact that many PCC members are seeking cannabis treatment because they “want to get off opiates and don’t want to get high” (personal communications with PCC staff).

KC is an inventor on U.S. Patent No. 62/018,484, describing buccal and sublingual cannabinoid formulations and method of making the same, which are the basis for the preparation of Trokie ® lozenges. The remaining authors declare that the research was conducted in the absence of any commercial or financial relationships that could be construed as a potential conflict of interest. The reviewer MDP and handling Editor declared their shared affiliation.

KC and GM-S designed the studies. KC coordinated the field research and conducted interviews. GM-S and SdV analyzed the data and generated results of the effectiveness and safety studies, respectively. GM-S wrote the manuscript with the aid of KC and SdV.

I’ve tried oils and did not care for them because of their flavor. It was like whatever you tried to put them in to hide the flavor always tasted like hemp. I like the lemon flavor of your product and also the fact that your tabs seem to work in 30n mins. I use the Trokie CBD RRT as a destresser when I need it and it works like a charm. I love your product & you definitely have a returning customer

Did you know that 40 million adults in the U.S. (that’s 18.1 percent of the population) struggle with anxiety disorders? Are you one of them? If you’re eager to learn …