A good bowl of ramen is a marriage of four things: broth, tare (seasoning), noodles and toppings.

As with pasta in Italy, there are potentially hundreds of types of noodles. One constant? They should be served firm and slightly under-done, as they’ll continue cooking in the bowl. In Japan, no-one waits for their friend’s ramen to arrive. It’s most polite to dig in the second your bowl hits the table – with plenty of appreciative slurping – to prevent the noodles from turning to mush.

Classic seasonings such as shoyu (soy sauce), shio (salt) and the pungent miso (fermented soybeans) add another layer of complexity to the soup. Tare recipes are often a ramen chef’s most precious secret. 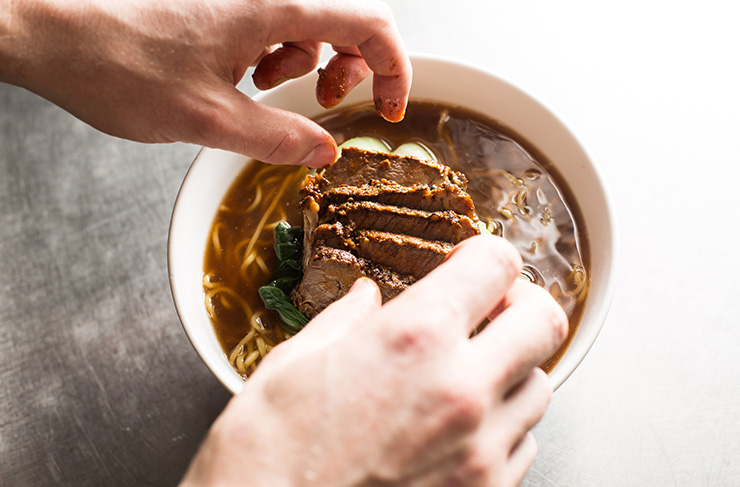 Easily some of the most well-renowned and best ramen in Melbourne, Mugen Ramen without a doubt fits the city’s stereotype. Like most of Melbourne’s top brunch spots, it is hidden in an alleyway, and are known for serving some of the finest tsukemen (dipping ramen). If you're in a hurry, go straight for the ramen, but if you've got time snack your way through the Wagyu beef or the Scallop Gratin (made with white sauce and shiitake mushrooms) as you watch cult Japanese movies being projected on the big wall screen.

The Melbourne CBD, Hawthorn and Carlton Hakata Gensuke outposts seem to have been uprooted from Japan and plonked down in Melbourne, complete tick-sheet ordering system and customisable noodles. Some of the more traditional ramen Melbourne serves up, here you can choose not only your ramen's toppings and level of spiciness, but also just how al dente you'd like your noodles. It's worth coming back and experimenting until you find your perfect mixture, but if you're not sure where to start, go with something like the black tonkotsu ramen, which includes black sesame and garlic for an extra layer of intense, smoky flavour.

The signature Akamaru Shinaji Ramen with Tonkatsu broth is a must-try if you are a first-timer here. The pork broth is textured, creamy and seriously heart-warming, and comes with pork loin, bean sprouts, black fungus and thin noodles cooked to a density of your choice, plus a perfectly cooked, flavoured egg if you want it.

A relatively new ramen Melbourne is offering is Shizuku. It's all charcoal walls, big blonde wood light shades and terrariums at this modern outfit that specialise in ramen and craft beer. The drinks list runs from the usual Asahi right through to the less common bacon maple ale and delicious rum-infused umeshu (plum wine), and the ramen menu is just as diverse. For ramen newbies, the classic shoyu ramen—wheat noodles and pork in a slightly salty soup—is a good place to start. But for ramen diehards, we recommend the tonkotsu shio ramen, with pork belly and noodles that start out springy but become more tender and flavoursome the longer you let them swim in the pork bone broth.

The Japanese-founded franchise, Ippudo, has established what they call “Global Standard” ramen. The brand was founded in 1985 at Hakata, Japan by Shigemi Kawahara and now has over 200 locations worldwide. With awards piling high, the ramen served here is definitely worth the calories.

Along with the rest of this list, Yoku Ono is easily a contender for the best ramen in Melbourne. The menu is fresh, inventive and plays to the seasons; there are however several staple ramen dishes that you can't go past, like their take on the miso chicken ramen and signature Yoku Ono ramen—it’s the ramen Melbourne goes to if you’re on the south of the city.

In the belly of Mid-City Arcade, you’ll find Mr Ramen San tucked away on the Little Bourke St end, usually with a line outside. One of the oldest ramen joints in Melbourne, and certainly some of the best ramen in Melbourne, this eatery is known for their 24-hour tonkatsu broth and housemade noodles. Mr Ramen San offers up different ramen variations such as the spicy chicken ramen, seafood ramen, family-style hotpot with pork broth and most impressively, an entirely vegan ‘Charsu’ ramen.