Gaborone is one of the fastest growing cities in Africa. The growth of Gaborone, especially suburban growth, has caused much of the farmland surrounding the city to be absorbed into the city. Much of the food for Gaborone comes from north of the city with some smaller-scale farms on the southern end.

The city centre was planned to be functionalist, with major buildings designed and built in the style of Modern architecture. The city is surrounded by smaller buildings. The city’s central business district (CBD) is still under construction so when one says downtown, they actually mean the Main Mall and Government Enclave areas where tall buildings are usually found. The Main Mall, a car-free shopping and commercial area, runs in an east-west direction with the Government Enclave and National Assembly on the west end and the Gaborone City Town Council complex on the east.

Gaborone’s CBD is home to the new Square Mall, The Tower, the new SADC headquarters, the Industrial Court, a court specifically for settling trade disputes, and the Three Dikgosi Monument, a landmark featuring the statues of Khama III, Sebele I, and Bathoen I, three dikgosi, or chiefs, who traveled to Great Britain to establish the Bechuanaland Protectorate separate from Southern Rhodesia (present-day Zimbabwe) or the Cape Colony (present-day South Africa). The monument was inaugurated on 29 September 2005. While the statues represent famous historical figures, there has been some controversy over the cost of the construction, P12,000,000 (approx. US$1.7M, €1.4M, or £1.1M as of June 2010), and over the construction company, North Korean Mansudae Overseas Projects, putting the wrong inscription date. Other buildings under construction in the CBD include the Holiday Inn Gaborone, retail space, and office space. 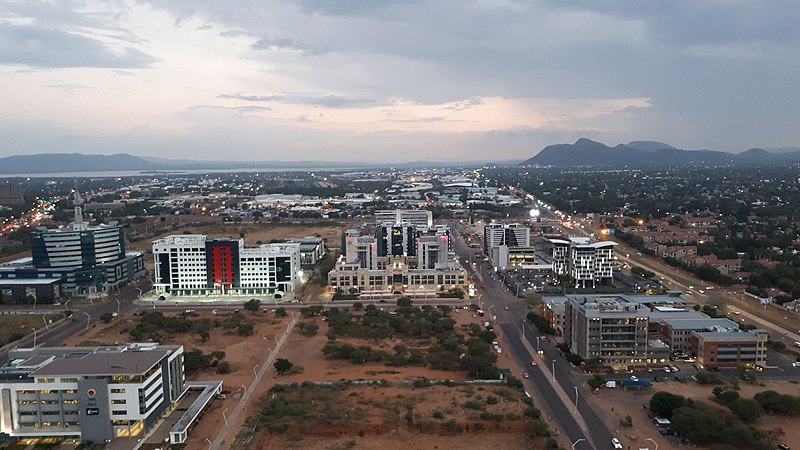 Click on a date/time to view the file as it appeared at that time.

The following other wikis use this file:

File usage on other wikis

There are no pages that use this file.

The above list may not be comprehensive. Fees and deposits may not include tax and are subject to change.