One of these reasons may be the extent to which conventional wisdom in our society ascribes tobacco addiction to the pharmacological effects of nicotine. If attributing addiction to the substance used is a problem for understanding drug addiction in general, in the case of tobacco addiction it becomes especially paradigmatic. The problem with drug addiction in general, and tobacco addiction in particular, is, as we have explained, the problem tends to be attributed to a disorder of the brain caused by a pharmacological agent, when at the base of all addictive behaviour, what is actually introduced is a habit. And this habit is established, not so much by the effects of the substance itself, as by the behaviours involved in seeking and consuming the substance. And it is these habits, as forms of conduct, that are difficult to correct. Indeed, in the specific case of nicotine it is very difficult to train animal models to be addicted to the substance. And as we have seen, the rates of tobacco cessation by pharmacological means (including patches, gum and any other nicotine-based pharmaceutical preparation) are distressingly low 12 . Therefore, of all the reasons for which tobacco proves addictive for so many people, the fact that it contains nicotine is probably the least significant. It is precisely the fact that it is a habit, which is generally established over a long time –in most cases over several years– that makes it so difficult to correct. As humans, we establish our everyday behaviour by means of habits and the more ingrained a habit is, the more difficult it is to change. This is all the more true, insofar as the habit –as in the case of tobacco– offers such versatility for that the individual can indulge it when engaged in an animated conversation, in a state of depression or when waiting for a bus – in short, in nearly every aspect of his or her life, except sleep. This versatility and generalisation make the habit of smoking so especially difficult to correct.

Only one study has researched the role of CBD as a treatment for addiction to tobacco smoking. In a pilot clinical study, the effectiveness of CBD was compared against a placebo in treatment of tobacco addiction. (A pilot study is one with a small number of subjects, used to test a working hypothesis before moving on to a larger, and therefore more economically costly, sample). It was double blind (neither researchers nor subjects knew who received what treatment), randomised (patients were assigned one or other treatment at random) and placebo controlled (the active pharmaceutical was compared with an inactive one). 24 subjects were recruited who smoked more than 10 cigarettes per day and given an inhaler to be used whenever they felt the urge to smoke. Twelve subjects (6 females) received an inhaler containing CBD and the other twelve (6 females) received an inhaler with a placebo. Treatment lasted one week. During this time, they recorded their cravings for tobacco and anxiety on a daily basis. A follow-up interview was conducted 21 days after treatment. Following the treatment week, cigarette consumption in the CBD group had fallen by 40%, a significant contrast with the placebo group, but these differences were not kept up after 21 days. Both groups reported the same reduction in craving and anxiety over the 7 days the treatment lasted, but, again, by day 21 they had returned to the initial conditions. The authors conclude: “the preliminary data presented here suggest that CBD may be effective in reducing cigarette use in tobacco smokers, however larger scale studies, with longer follow-up are warranted to gauge the implications of these findings. These findings add to a growing literature that highlights the importance of the endocannabinoid system in nicotine addiction” 18 .

CBD is in vogue. Whereas in the 1990s seed companies vied to obtain the strain with most THC, they are now competing for more narcotic varieties – in other words, those with the highest CBD content. We don’t know the reason for this change: whether cannabis consumers have grown tired of such a strong high (THC concentrations in Dutch marijuana have been falling by 0.22% per year since 2005 16 ); whether it is a result of the industry’s marketing campaigns attributing the medicinal effects of cannabis to CBD; whether it simply reflects a market in which consumers want a varied product offering different experiences depending on what they are looking for at any specific time, or whether it is combination of all of these factors, or even some other reason. One other possible reason is the fashion for CBD oils which –albeit the labels do no state as much– also contain sufficient quantities of THC to possibly cause a consumer to test positive in a roadside saliva test. Moreover, for reasons we shall not go into here, the legality of these oils is decidedly dubious.

José Carlos Bouso is a clinical psychologist and a doctor of pharmacology. His areas of interest are psychopharmacology and the therapeutic properties of entactogens, psychedelics and cannabis. He has conducted therapeutic research with MDMA, pharmacological research with several substances of plant and synthetic origin and has also performed studies on the long-term neuropsychological effects of substances such as cannabis, ayahuasca and cocaine. He is author of the book “Qué son las drogas de síntesis” [What are synthetic drugs?], and co-author of “¿La marihuana como medicamento? Los usos médicos y terapéuticos del cannabis y los cannabinoides” [Marihuana as medicine? The medical and therapeutic uses of cannabis and cannabinoids] and “Ayahuasca y salud” [Ayahuasca and health]. His research has been published in scientific journals. He is currently the director of scientific projects at Fundación ICEERS.

Vaping cannabis as an alternative to smoking tobacco

Although the accepted theory on drug addiction appears to be that it is a chronic, often relapsing brain disease that causes compulsive drug seeking and use, causing a deterioration in control of consumption despite harmful consequences to the addicted individual and to those around him or her 9 , an ever larger number of experts are beginning to challenge this view of addiction as a brain disease 10 . At least two studies have found that the percentage of people who recover from their addiction throughout their lives is, in nearly all cases, over 80% 11 . The results of these studies also indicate that tobacco addiction is the one of the forms of addiction with the lowest cessation rates. 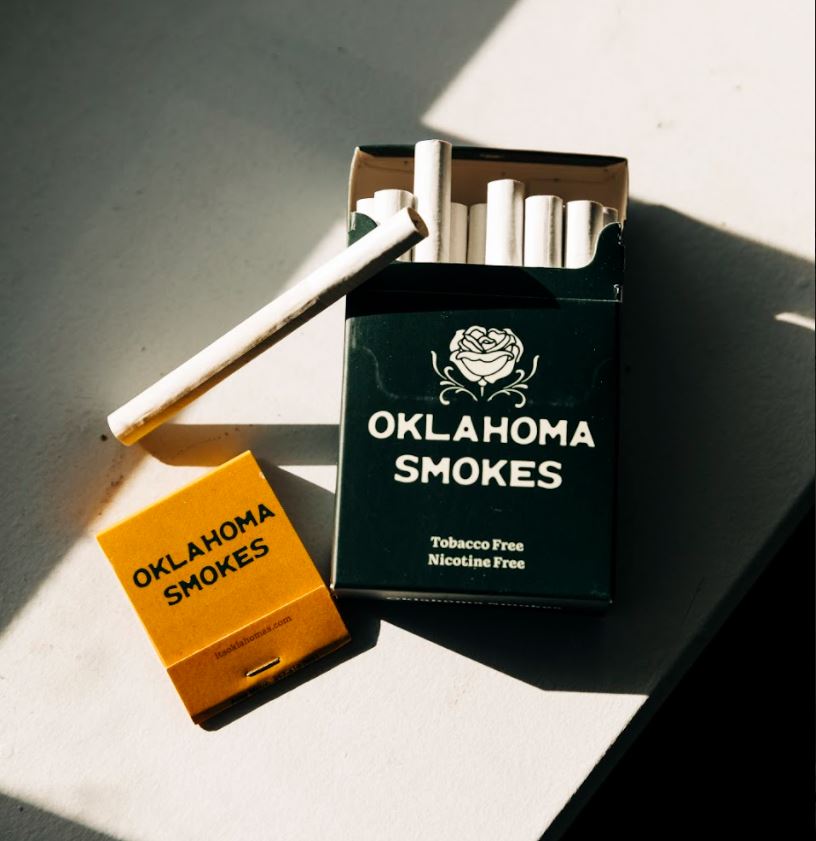 Hemp doesn’t need to be consumed nearly as much as tobacco to achieve long-lasting sedative effects. After you stop smoking cigarettes for about a month, you’ll notice how much more money you have saved in your bank account. Then it will start to register in your brain that you were spending way too much money on cigarettes in the past. The monetary savings will be a big motivator to continue using hemp while ditching the cigarettes forever.

Oklahoma Smokes is one hemp brand that sells smokable sticks that look just like cigarettes. They even have the brown filter and white paper wrap to resemble a real cigarette. If someone sees you smoking the hemp stick, they won’t be able to tell the difference, and neither will you.

No fear of the law

The Oklahoma Smokes brand of hemp flower smokes is free of tobacco, nicotine and chemical additives. The ingredients are 100% natural, making the CBD extra potent and efficient in the smokes. The hemp flower smokes even taste better than tobacco cigarettes. It won’t take you long to enjoy the flavor and experience while knowing it all comes from natural and healthy ingredients.

Hemp does not come with any side effects other than relief from these symptoms. Hemp reduces the urge to want to smoke tobacco cigarettes. The CBD in hemp can reduce high blood pressure, insomnia, depression, anxiety, stress, and all other symptoms that occur after quitting smoking. Its chemical properties alter the brain’s endocannabinoid receptors to provide you with calmer and more positive feelings.

Hemp is a cannabis plant filled with medicinal terpenes and cannabinoids, including cannabidiol (CBD). Cannabis has over 100 cannabinoids in its chemical makeup, but CBD is the most potent non-psychoactive cannabinoid. Tobacco addicts have a much better chance of quitting smoking if they consume a modest amount of CBD each day.

You have nothing to fear from the authorities if you decide to smoke hemp rather than cigarettes. When the U.S. Congress passed the 2018 U.S. Farm Bill, it protected the right to farm, harvest, and consume hemp in most of the country. Some states have local regulations against it, but you won’t have any legal issues on a federal level.