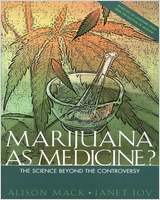 Coping with stiff, aching, cramping muscles is a way of life for most of the 2.5 million people in the world who have multiple sclerosis. Many of the 15 million people with spinal cord injuries also suffer from the same symptoms, which cause pain, limit movement, and rob people of needed sleep. Although several conventional medications can reduce these patients’ discomfort, taking them rarely provides complete relief. Often the drugs cause weakness, drowsiness, and other side effects that some patients find intolerable.

Marijuana as Medicine? The Science Beyond the Controversy.

The drugs most commonly prescribed to treat the symptoms of MS include baclofen (Lioresal) and tizanidine (Zanaflex) which relieve both spasticity and muscle spasms but often only partially and sometimes not at all. Both are sedatives, so they cause drowsiness; additional side effects include dry mouth and muscle weakness. The latter is especially problematic for people with MS, whose muscles get weaker as the disease progresses.

Whether marijuana could yield useful medicines for spasticity remains to be determined, for the clinical evidence to date is too sparse to accept. But the few positive reports of the ability of THC and nabilone to reduce spasticity, together with numerous anecdotal accounts from marijuana users with MS and spinal cord injuries, suggest that carefully designed clinical trials testing the effects of cannabinoids on muscle spasticity would be worthwhile.

Many studies reporting the effects of cannabinoids in in vivo models of MS have been performed. We here summarize the main findings described in literature about the antispastic properties of cannabinoids and their derived molecules. In mice with chronic relapsing experimental allergic encephalomyelitis (CREAE), an animal model of MS, evidence has been presented that both exogenous and endogenous cannabinoids, via cannabinoid receptors, alleviate spasticity and tremors ( Pryce and Baker 2007 ). Intravenous administration of THC and also R (+)− WIN55,212-2, a potent synthetic agonist of CB1 and CB2, rapidly decreased both the frequency and amplitude of tremors in limbs and hind limb spasticity of mice with this disease. Two lines of evidence suggest that these two beneficial effects are mediated by cannabinoid receptors. Firstly, the S(−)- enantiomer of WIN55,212-2, and cannabidiol, which are both very weak agonists of CB1 and CB2 receptors, did not reduce spasticity. Secondly, SR141716, which is a selective CB1 receptor antagonist, and SR144528, which is a selective CB2 receptor antagonist, prevented R(+)−WIN55,212-2 from inhibiting tremor. These findings are very important because they may lead to novel strategies for the treatment of MS-induced tremor and spasticity, for which no efficacious remedy has yet been developed. A crucial point that deserves further investigation, at least if therapeutic applications are to be developed is the full assessment of the possible psychotropic side effects of intravenous administration of cannabinoids. Methanandamide, a CB1-receptor-selective and metabolically stable analogue of the endocannabinoid anandamide ( Mechoulam et al 1998 ), was almost as potent as R (+)− WIN55,212-2 against hind limb spasticity in mice with CREAE. This finding implies that drugs based on endocannabinoids, which have been reported to have very low potential for physical dependence ( Aceto et al 1998 ), could also be used in the treatment of MS-induced spasticity. Another nonpsychoactive endogenous compound, the anti-inflammatory mediator PEA ( Lambert and Di Marzo 1999 ), also induced a significant, albeit transient inhibition of spasticity ( Pryce and Baker 2007 ); however, the mechanism of action of this compound, which does not bind appreciably to CB1 or CB2 receptors, is still a matter of speculation ( Lambert and Di Marzo 1999 ). SR141716 and with less potency SR144528, produced a significant worsening of both tremors and spasticity of hind limbs and tail of CREAE mice ( Pryce and Baker 2007 ). This finding raised the possibility that endocannabinoids such as anandamide and 2-AG ( Mechoulam et al 1998 ), might be produced during CREAE in an attempt to compensate for the spastic defect. It was shown ( Pryce and Baker 2007 ) that in normal ABH mice, whole brains and spinal cords contained similar levels of AEA, 2-AG and PEA. There was a modest increase of AEA in spastic brains compared with levels in normal brains. However, there was a marked increase of AEA, 2-AG and PEA within the spinal cord of spastic mice in comparison with normal animals. On the basis of these findings, it was suggested that augmenting the levels of endogenous AEA might have a therapeutic effect, as exogenously applied and naturally occurring cannabimimetic metabolites, in particular AEA, can limit spasticity. Furthermore, the blockade of degradation with specific inhibitors may represent an alternative to increase the bioavailability of the endocannabinoids. Spasticity could be ameliorated by injection (10 mg/kg iv) of either the competitive reuptake inhibitor AM404 ( Beltramo et al 1997 ) or the selective FAAH inhibitor, AM374 ( Deutsch et al 1997 ), both of which have been shown to enhance AEA neuromodulatory actions ( Beltramo et al 1997 ). These compounds have very low affinity for cannabinoid receptors ( Beltramo et al 1997 ; Deutsch et al 1997 ). The antispastic effect of AM374 (1 mg/kg iv) was blocked by cannabinoid receptor antagonists (SR141716 and SR144465, both 5 mg/kg iv) administered 20 min prior to AM374. These findings suggest that the inhibitory effect on spasticity by AM374, which does not directly activate CB receptors ( Deutsch et al 1997 ), is due to enhancement of endocannabinoid levels and subsequent stimulation of CB receptors. Both AEA and AM404 may also behave as vanilloid receptor (TRPV1) agonists ( Zygmunt et al 1999 ; Smart and Jerman 2000 ; Smart et al 2000 ), but the role of TRPV1, if any, in control of spasticity is yet to be demonstrated. The extremely selective anandamide transporter inhibitor VDM11 (10 mg/kg iv), which has essentially no CB or TRPV1 agonist activity ( De Petrocellis et al 2000 ), exerts a similar inhibition of spasticity. This finding, furthermore, supports the hypothesis that endocannabinoids mediate control of spasticity via CB receptors. It was observed that agonists of TRPV1 reduce bladder hyper-reactivity in MS ( Fowler et al 1992 ) and have a modest antispastic effect in EAE mice, while a substantial effect was obtained with arvanil, a synthetic compound that can activate both CB1 and TRPV1 receptors ( Melck et al 1999 ). This effect persists using antagonists of CB1 and TRPV1 and in CB1 knockout EAE mice. According to these experimental findings, it can be suggested that the antispastic effect of arvanil can be independent from CB1, CB2, or TRPV1 receptors and mediated by a different site of action.

The emerging literature on the effects of endocannabinoids and new cannabinoid-derived molecules on MS could lead to the development of promising models for the therapy and management of disabling symptoms of the disease. Considering that current treatments of MS are partially effective and have risks of side effects not easily tolerated by patients, the development of new synthetic endocannabinoids or cannabinoid-derived drugs could represent an alternative strategy to pursue. A crucial point that deserves further investigation is the full assessment of the possible psychotropic side effects that represent the limits to the use of cannabimimetic drugs in MS therapy. The possibility of overcoming these side effects to develop novel approaches represents the main open question on the use of cannabinoids as new therapeutic drugs for the treatment of MS.

There was evidence of a treatment effect on patient-reported spasticity and pain (p = 0.003), with improvement in spasticity reported in 61%, 60%, and 46% of participants on cannabis extract, Δ9-THC, and placebo, respectively.

Cannabis contains a series of compounds, but it has been found that the major psychoactive ingredient is Δ9-tetrahydrocannabinol (THC) ( Mechoulam and Gaoni 1967 ). Two selective cannabinoid receptor subtypes have been identified so far ( Matsuda et al 1990 ; Munro et al 1993 ), CB1 and CB2, that are expressed in nervous and peripheral cells. THC mediates the majority of its activities through stimulation of cannabinoid receptors CB1, which are expressed throughout the central nervous system (CNS) ( Matsuda et al 1990 ; Howlett et al 2002 ). Following the discovery of the receptors, fatty acid endogenous ligands, such as anandamide (AEA) and 2-arachidonoyl glycerol (2-AG), have been discovered in mammalian animal and human nervous tissues ( Devane et al 1992 ; Sugiura et al 1995 ), and a degradation system including a putative reuptake mechanism and hydrolytic enzymes has been identified ( Devane et al 1992 ; Deutsch and Chin 1993 ; Mechoulam et al 1995 ; Dinh et al 2002 ; Saario and Laitinen 2007 ). A whole endogenous signaling system consisting of cannabinoid receptors, endocannabinoids, and the proteins for their synthesis and inactivation led to the definition of the endocannabinoid system.

The main study covered 15 weeks, with all patients discontinuing treatment during week 14. There was no evidence of treatment effects on change in Ashworth score or other measures of disability from baseline to week 13. However, there was evidence of improvement in walking time for ambulatory patients and in patient perceptions of spasticity, muscle spasms, pain, and sleep. There was evidence of patient unmasking, complicating interpretation of patient assessed outcomes. These findings are consistent with those of smaller studies, ( Petro and Ellenberger 1981 ; Ungerleider et al 1987 ; Greenberg et al 1994 ; Killestein et al 2002 ) which showed some subjective, but no observer-verified, improvement in disease-related spasticity with use of cannabinoids.