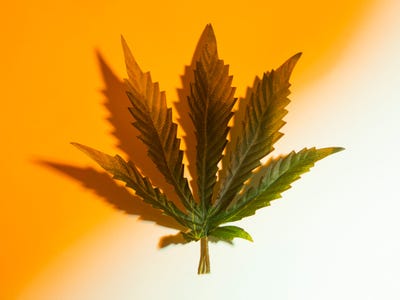 They also found that people who vaped cannabis containing 9% CBD and less than 1% THC, a psychoactive component that can cause slowed reactions and warp the perception of time, were less likely to sway a car off-path than people who vaped THC-only cannabis before driving.

To study how different types of cannabis affected participants’ driving skills, the researchers focused on how much they veered from a straight path while driving, using a measurement called standard deviation of lateral position (SDLP).

Researchers asked each person to rate how high they felt. They also rated their levels of anxiety, sedation, confidence, and enjoyment of the drug effect on 10-point scales.

The FDA cautions weary travelers about driving on CBD.

The science of drowsy driving

In his study, 14 participants vaped 125 milligrams of liquid that was either THC-heavy or equal parts CBD and THC. Then, each participant played a simulated driving game where they had to follow GPS instructions on highway or rural roads. When participants vaped both THC and CBD in equal concentrations, they tended to swerve more during their driving tests and reported feeling impaired up to four hours later.

Myths about CBD and driving

Still, the kind of CBD that we might ingest and think nothing about — like seltzer or a gummy — probably doesn’t help your performance on the road (especially if you’re already impaired). As far as the consequences of CBD use and driving go, if they’re out there, ongoing work is looking to illuminate them.

Consuming CBD does not impair driving performance, and THC only provides mild impairment for up to four hours, according to new research revealed early December.

“The SDLP following vaporized THC-dominant and THC/CBD-equivalent cannabis compared with placebo was significantly greater at 40 to 100 minutes, but not 240 to 300 minutes after vaporization,” the study’s authors wrote, adding “there were no significant differences between CBD-dominant cannabis and placebo.”