The compression of LRV causing obstruction of its flow into the inferior vena cava is known as nutcracker phenomenon (NP).1 Most commonly, this occurs due to its compression between the superior mesenteric artery and abdominal aorta. There are two important anatomical considerations of classical NP; first, in normal individuals, the angle at the origin of superior mesenteric artery from aorta (aortomesentric angle) is close to 90°, whereas in patients with NP, this angle is <90°. Second, there are many venous tributaries entering the LRV; if valves are absent in these tributaries, then there is effective decompression of LRV, whereas presence of valves causes the LRV to distend, and the subsequent increased pressure results in formation of varices and collaterals.2 Other causes of NP include external compression by pancreatic neoplasm, enlarged lymph nodes or arching testicular artery, but the occurrence of NP due to external compression by nearby organs is rare, limited to anecdotal case reports. NP can be anterior nutcracker as described above or posterior nutcracker in patients with retroaortic renal vein, compressing the LRV between the aorta and vertebral bodies. The symptoms of NP vary from asymptomatic microscopic haematuria to severe pelvic congestion. Haematuria is the most common presenting feature followed by flank pain. Varicocele is seen in up to 10% of cases.2 For patients with mild symptoms, conservative treatment and observation are best. For intractable symptoms, nephrectomy may be required. Internal and external stenting of the LRV have also been described.3 In our case, the inciting cause of NP was type 1 choledochal cyst so surgery was performed, which relieved the associated symptoms. To our knowledge, this is the only case reported where a dilated CBD was the cause of NP.

Diseases of retroperitoneum may cause nutcracker phenomenon (NP) and symptoms related to NP may be the presenting complain in such patients. 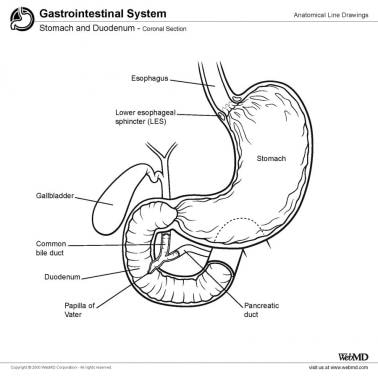 The duodenojejunal (DJ) junction or flexure is an abrupt turn at the level of L2 vertebra (see the image below); it is identified during surgery by the inferior mesenteric vein (IMV), which lies to its immediate left. The DJ junction is attached to the posterior abdominal wall by the suspensory muscle of the duodenum or the ligament of Treitz; many fossae (paraduodenal, duodenojejunal) are found around this junction.