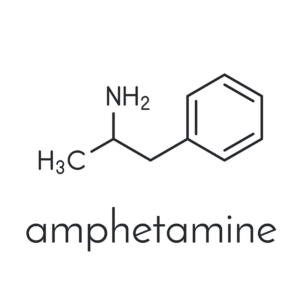 Amphetamine (Adderall) has its benefits as well as side effects. The main factor that determines the severity of side effects is the dosage.

Other names for amphetamine include:

Although few human studies have evaluated the interactions between CBD and amphetamines, some animal studies suggest that CBD may alter the effects of amphetamine while also attenuating the unwanted long-term side effects associated with its use [3].

You should, however, always consult your doctor if you’re on any medication before adding any other drug — even a natural one — to avoid possible interactions.

What Are the Side Effects of Amphetamine (Adderall)?

With that said, CBD could make amphetamines ineffective for treating ADHD, which would negate the entire point of using the medication in the first place.

Amphetamine (Adderall) exerts its stimulatory effects by increasing the release of dopamine and norepinephrine, and to a lesser extent, increases serotonin.

This mechanism is relevant when amphetamine is taken in high doses with CBD. It may cause increased heart rate, arrhythmia, confusion, agitation, tremors, and muscle pain.

The severity of this interaction is considered mild and unlikely to cause significant side effects.

Most medications, as well as CBD, are metabolized by the liver before they’re eliminated from the body. CBD competes for the same enzymes involved with metabolizing amphetamines, which can cause the processing of both substances to become slower. This may lead to elevations in both CBD and amphetamines in the bloodstream with repeated use.